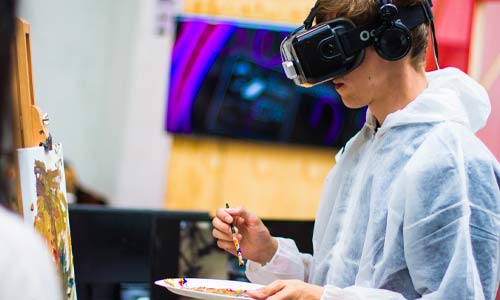 As of May 2019, Shutterstock’s market value is $1.43 billion, Snap’s is $15 billion, Airbnb’s is $35 billion and Square’s is $28.65 billion. If you think about what these companies have in common, what comes to mind? Some will say they are innovative and creative; some will say they are revolutionary. These companies have leveraged new technologies to reshape their industries and create multibillion-dollar businesses. However, there is another similarity that may surprise you.

Each of these companies has founders, or co-founders, with backgrounds in art and design. Jon Oringer, the founder of Shutterstock, is a photographer; Evan Spiegel from Snap is a product designer; Joe Gebbia and Brian Chesky from Airbnb are designers, and Jim McKelvey from Square is a glass artist.

The household names in business, and especially in technology, tend to share backgrounds in finance, engineering, software development or computer science. Perhaps it’s easier for us to understand them, their ideas, and how their backgrounds led them to these businesses. But how are artists relevant to technological developments? How do they contribute to new products and services? And, what is it about the artist-entrepreneur that we should know? Hint: the artist-designer-entrepreneur is certainly not limited to Gebbia, McKelvey or Oringer.

What follows is one example of this type of curious connection.

In the world of tech startups, Paul Graham is as famous as you can get. This startup guru is a successful entrepreneur and venture capitalist known mostly as the co-founder of YCombinator (YC), a Silicon Valley-based accelerator. YC is known for providing initial investments to some of the most innovative companies in existence today: Dropbox, Airbnb, and Stripe, to name just a few. With more than 200 exits and 85 billion dollars of valuation for their portfolio companies, YC’s team probably knows a thing or two about startups.

However, what I find interesting about Graham isn’t the fact that he’s a successful engineer, investor, and entrepreneur. What catches my attention is the fact that he’s also a painter. After earning a Bachelor of Arts in philosophy, and a Master of Science and a Ph.D. in computer science, he went on to study painting at the Accademia di Belle Arti in Florence and later at the Rhode Island School of Design (RISD).

The relationship between Graham, YC, and RISD is tied to the story of Airbnb, the online marketplace for vacation rentals. Brian Chesky and Joe Gebbia, the two co-founders of Airbnb, met as design students at RISD, the same institution where Graham studied painting. When they were looking to accelerate their idea, they applied to and were accepted by YC. In 2009, YC, the company co-founded by Graham, became the first investor in Airbnb.

Did Chesky and Gebbia’s affiliation with RISD allow Graham to see something different in these two young designers? Perhaps. One thing I’m sure of is the fact that the meeting of Graham and this creative duo worked to everyone’s benefit. When asked about Airbnb, Graham replied that “we didn’t love the idea of renting spare rooms to strangers … but we knew we were going to take them.” Graham and his YC team believed in these founders.

What makes it remarkable is that it all happened almost ten years ago, when investing in entrepreneurs with art and design backgrounds was uncommon. The investment world was (and still is) far more inclined to invest in companies founded by programmers, engineers, and MBA graduates.

Word is spreading among investors about what YC did in 2009. Although we are living in times where valuations are reaching unimaginable numbers every few months, one interesting data point was revealed in 2016 by Kleiner Perkins, the Silicon Valley-based investment firm in their Design in Tech report. What they discovered was that approximately 20% of the global Unicorns (private VC-Backed companies with valuation over one billion dollars), at the time, had either co-founders who came from an arts and design background, including architecture, music, fine arts, media arts, or founders who had embraced this creative approach as part of the core of the company. As founders with creative backgrounds are becoming increasingly common, some venture capital firms, right along with their multimillion-dollar portfolios, are catching up. Unsurprisingly, many of these firms have begun to add design partners to work with startups during their formative stages.

Why artists and designers, you may ask? While you might think that it’s important to bring them on board to formulate aesthetics and visuals, I’d like to suggest another way to think about these founders or potential collaborators. Instead of considering art as a way of doing, that is to say, what the painting or product looks like, consider art as a way of thinking.

Two characteristics come to mind when I think of creative talent, especially as related to artists: the ability to reflect the movements and changes in human culture, and questioning and challenging the status quo:

For generations, artists, as natural explorers, have been active in the borders between what we as humans know and don’t know. History shows that artists’ bold experiments and inventions often encourage new behaviors, norms, and values that eventually become mainstream. If you are curious to learn about cultural changes or what lies behind the transformations in human behavior, familiarize yourself with what artists are doing today. Most likely, it will become popular in a few years’ time. Google understands this, which is why they’ve established the Data Art Group, the Artificial Intelligence and Art Team, and other units that work with artists in order to learn from them and have a mutual exchange.

Artists are also relentless about challenging the status quo—they ask hard questions about the world around us and its social, political, and economic structures. Exploring the capabilities of technology, and its role in human life, is an essential part of this. All too often, we imagine an artist as a sixteenth-century painter locked in a studio laboring over a portrait. Yet, artists are like us—interacting with the world in which they live, and in our era this includes working with data and technology.

When we think about these defining characteristics of creative talent, we understand why we must expand our horizons to include the arts in our search for new ideas. An artist’s inclination to challenge their surroundings and engage with technology in a unique way can open new possibilities. Artists such as Fujiko Nakaya, Michael Naimark, or the late Stephen Wilson are pioneers who have worked with technology since the 1960s, developing revolutionary concepts, ideas, and prototypes that have become real products such as the MeeFog or Street View technology.

Entrepreneurs are constantly being encouraged to think differently and creatively. This advice should apply to the investment world, too. Maybe, just maybe, investors should get to know the talent that comes from a program such as the Interactive Telecommunications Program (ITP) at NYU. Or how about artist incubators like The NEW INC, the first incubator led by a museum? Or, maybe we need to just keep an open mind when an entrepreneur with an MFA instead of an MBA comes calling.

Is it possible that Graham’s creative background helped him see beyond the standard requirements and resume of a tech startup founder when it came to Chesky and Gebbia?

My advice is that you might have a future Chesky and Gebbia knocking at your door. Don’t rush to send them, and their $31 billion idea, away.

The article was originally published on the Israel Venture Capital Magazine.